The Educational System in the Philippines

The Philippines is a country located in Southeast Asia with three main islands: Luzon, Visayas, and Mindanao.  It shares maritime borders with Malaysia &  Indonesia in the south, and Vietnam & Taiwan to the north.

The Philippines has the second largest population in Southeast Asia which was estimated at 109,581,078 million in 2020, spread over its more than 7,600 islands.  The large population has a considerable influence on its education system, especially in urban areas where the population density is high.

Spanish Influence in the educational system

The Spanish came to the Philippines in March 1521 and established a colony from 1565-1898. For more than three centuries, the Spanish transformed the country from its original Malay roots into a Western-type Catholic-based culture.

Augustinians, Franciscans, Jesuits, and Dominican friars started arriving in the Philippines and established their schools across the country. These Spanish friars and missionaries educated the locals through religion and converted most Filipinos to Catholicism.

The Philippines is home to the oldest universities and colleges in Southeast Asia. Most notable of these educational institutions is the University of Santo Tomas (UST) -Manila, the oldest Catholic University in Southeast Asia founded in 1611. UST is still one of the most prominent universities in the Philippines, catering to thousands of students across all levels, including post-graduate studies,  Medicine, and Law.

But one valid criticism against the Spanish Educational system is that they only served the Spanish and wealthy Filipinos, which were called “Illustrados.”  Many Filipinos did not have formal education and could not attend Catholic Educational Institutions, which were only reserved for the wealthy and elite class.

Spain only introduced the modern public school system in 1857. Free access to modern public education to all Filipinos only started on December 20, 1863, through the enactment of an education decree by Queen Isabella II of Spain.

American Influence in the Educational System

The American occupation in 1898  contributed a lot to the Philippine Educational System. Through the efforts of the American government, the public school system became accessible to all Filipinos, and English became the primary language of instruction.

They established a new system of public education that was modeled after the United States school system. The Department of Instructions administered and established several schools across the Philippines.

How is the Philippine educational system structured?

Education in the Philippines is structured through the K to 12 programs of the Department of Education.  The said program covers 1 level of Kindergarten and 12 years of Basic Education, which is six years of primary, four years in Junior High School, and two years of Senior High School.

The Philippine school curriculum is based on the K-12 Most Essential Learning Competency (MELC) guideline of the Department of Education. The MELC is the main reference of all schools in the Philippines and determines the content and method of delivery for the different grade levels and students.

Classes are usually from June to March, with a short break during the Christmas season. However, due to the COVID19 pandemic, classes in the Philippines have been temporarily rescheduled. Some private schools started in September, while public schools will begin in the first week of October.

The K to 12 programs are implemented through various free public schools across the Philippines. Parents can also enroll their children in private Catholic and Non-sectarian schools in different cities and provinces.  Most Private schools in the Philippines offer pre-kindergarten classes for students.

Tertiary or College Education is free when you enroll in State Colleges and Universities. Slots are limited so students’ have to go through a rigorous selection process, which includes passing the entrance exam to enroll. Others may choose from hundreds of private universities and colleges that offer a variety of courses.

The Department of Education recently announced the enrollment of 22.36 million students in the public schools for the school year 2020-21. This number is 88.35% of last year’s total enrollees. A little lower, but considering the effects of the COVID19 pandemic is still a good number.

A typical class in public schools starts with students gathering in an open area inside the school compound for “Assembly,” followed by prayer, singing of the national anthem, and “Panatang Makabayan“ (Patriotic Oath). The school Principal or the Teacher-in-Charge will make important announcements before they go to their respective classes.

Public schools in the cities would have two shifts due to a large number of students. The school assigns each grade level, either a morning or an afternoon shift. Schools in rural areas or provinces only have one shift since they have a lower school population.

Subjects include Math, Science, English, “Araling Panlipunan” (Social Studies), Filipino, Values Education, MAPEH (Music, Art, P.E. & Health), and TLE (Technology and Livelihood Education). The students spend most of their time inside the classroom and wait for their teachers to come in. But in subjects like PE and TLE, students go out and transfer to a different venue or room.

Due to the COVID19 pandemic, there will be no face to face classes this year. Public schools will be learning through a variety of modalities.  They will be using Online Learning using learning apps such as google classroom and meeting or learning through printed modules prepared by teachers.

Department of Education records show that there are 14,435 private educational institutions in the Philippines. This year 2.12 million students enrolled in private schools or 49.3 percent of students enrolled last year. This is lower due to the adverse impact of the COVID 19 pandemic.

Private schools have smaller class sizes but have the same set of subjects following the MELC guidelines. Since Catholic organizations manage many private schools, they have additional subjects such as Religious Education.  Religious activities such as mass, retreats, community service, and daily prayers are incorporated into their curriculum. They also offer special courses like dance, robotics, drama, and other special classes not included in the MELC guideline.

Most Private schools are more equipped than their private counterparts but follow the same guidelines. A typical day would include an assembly, singing of the National Anthem, reciting the Panatang Makabayan (Patriotic Oath), and morning prayer. Afterward, they will have their normal subjects and transfer venue for PE, TLE, Computer, and Science Laboratory.

The COVID19 pandemic has affected these schedule since face to face class is still not allowed. Students of private schools use online platforms such as Schoology, Google Classroom, Canva, Zoom, Google Meet, or other applications.  They have a combination of synchronous (Live)  and asynchronous(Non-live)  sessions with their teachers.

How is the teaching experience in the Philippines

The COVID19 pandemic also added to the work, since teachers are now expected to create online-modules, instructional videos and learn new online teaching apps. School administrators should invest more in training and online materials for teachers.

Teaching amidst a global pandemic is challenging, but it’s still wonderful to see the teachers and students doing their best to study and learn amidst all the challenges. The key is flexibility and openness to new ideas,  willingness to change, and adapt to the new normal of education. 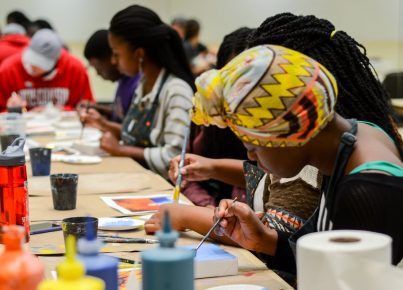 International Education
What the Education System Is Like In Port Harcourt, Rivers State, Nigeria

The educational system in Nigeria has changed over the past decade. This…